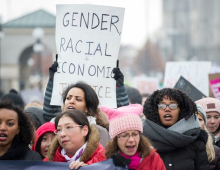 Voices of protest: The inner lives of women in social movements

It has been 62 years since the Federation of South African Women bravely took a stand against the injustices of Apartheid laws. Despite this fact, the role that women play in social movements and social movement organisations in not fully recognised. By Thembelihle Maseko

Even though researchers and publishers who write about women’s experiences and dynamics within the movements note that these spaces are dominated by women; the way that they write about them tends to exclude women’s narratives which denies women the opportunity to talk about their daily lived experiences in the private space of their home. There are many reasons for the habit of side-lining women in movements and politics even though it has been noted that women today continue to play a defining role in shaping power relations in their own terms even though gender inequality still remain an acknowledged obstacle (Britton and Fish, 2009).

One common way in which women’s narratives remains largely excluded in literature or news reports has to do with their role in leadership. Even though there are more women than men in social movements, men retain dominant roles in the leadership of social movements. For instance, research by Pointer (2004) with the Mandela Park Anti Eviction Campaign (MPAEC) highlights that there was no representation of women within the movement. This was also the case with the research I did in Freedom Park with the social movement organisation Abahlali baseFreedom Park where there were only three women in the leadership committee at the time. This trend is common with many movements in South Africa, and because there are more male representatives scholars and reporters may tend to interview those in the leadership, it is in this process that women’s voices get marginalised. The important question to consider then is how difficult or easy it is to gain access to female participants in these spaces, how can one uncover their lives?

Issues of patriarchy are not addressed in an in-depth manner in literature on social movements even though women’s role is acknowledged. In the community of Freedom park, outside Soweto there is a social movement called Abahlali baseFreedom Park (AbFP) and the leadership meetings there have more male representatives, women tend to feel as though issues that affect them directly have not been addressed adequately within the organisation. In the AbFP leadership meetings that I attended, men tended to speak more than women did. Even the few women that were there shied away from speaking whereas in the community meetings and street committee meetings they are more vocal. Community struggles and possible solutions were discussed; however, issues that are gendered were not mentioned. In an interview when I asked Nhlanhla about the role of women in the community she stated that “we are not feminists, we don’t believe that men are closing doors for us” and she also said that “the challenges that we are facing, we are facing them as people not as women”. Nhlanhla’s understanding of feminism explains the transition of the roles that women have taken over the years. Instead of challenging the issues of gender within the movement or the community they decided to work together with men and independently of them.

Female activists like Nhlanhla, even though they claim not to be feminists, do appear as such to some level when they refuse to stop talking in the community meetings or form their own organisation that values their needs. If women form an organisation within and outside an organisation, which is independent of a male dominant organisation could be an indication that they are implementing alternative ways of challenging patriarchy in subtle ways. Indeed, feminism “has a direct political dimension, being not only aware of women’s oppression, but prepared actively to confront patriarchal power in all its manifestations” (Hassim, 1991: 72). I got the impression that they deny being feminists because they saw it as a ‘bad word’ amongst certain groups of men in society.

The purpose of this organisation within the main SMO is to allow them to talk about issues that affect them directly. Issues such as unemployment, the inability to provide for the children and not having a place to stay affect women directly. An Anonymous woman and Nhlanhla (females, conversation, 2016) said that they saw it as their direct responsibility, for instance, to make sure that nobody in the family goes to bed on an empty stomach. There is always a sense that men can afford to take their minds off these things by going out to take a drink with friends. Women, on the other, hand, cannot afford to do the same. It almost seemed as if every single moment of their waking life is spent worrying about the next meal, bar of soap, bucket of water, the coming winter, floods, school fees, demolitions, and so on. Men could not understand some struggles they argued, in the same way. My view is that this organisational structure, the women’s structure within AbFP, is the most direct proof of the shattering of the binary between private and public places.

The women’s organisation was an alternative discursive space within the space of a SMO. It allowed for women to be both dominant and visible in their role, and for their voices to be fully heard as they, to a certain extent, feel excluded in the SMO of AbFP. This women’s organisation has different rules and norms from the core of the SMO. For instance women’s needs and voices are valued more in this setting. The AbFP leadership structure was primarily active in the public domain, while the street committee was the heart and pulse of the organising largely hidden from the media.

Social movements and SMOs are invented participatory spaces that take place in the public arena, but where private issues are discussed. When looking at the case of Freedom Park, women do most of the organising in the street committees, located in people’s yards, and report back to the AbFP leadership. Poppy (female, conversation, 2016) said they met weekly to discuss their struggles. Therefore, writing about women’s struggles only within social movements, and neglecting street and block committees and private homes where most groundwork is done, also, to a certain extent overlooks the relationship between the private and the public.

I am highlighting the intersectionality of the responsibilities for women is to show how protests unfold in a place such as Freedom Park. I suggest that protests tend to begin with the women, in the home. Protests unfold largely due to the sometimes very small fluctuations, disappointments and frustrations that women face daily in the home. As this study indicates, some of these protests would be highly unlikely in the absence of those frustrations and ordeals experienced in the home on a daily basis.

The need for women to organise separately from men has served to highlight their increasingly visible role. They no longer merely pull the strings in the background, as it were. This organisation within an organisation is a “safe space” for the women to discuss what they would not ordinarily say in the presence of men. This safe space allows them to share solutions for their households. This is a serious undertaking. Furthermore, there were many homes headed by females only in Freedom Park. These women were also the men of the house, so to speak. Nhlanhla and another anonymous woman told me that they felt the need to organise women independently because they were aware of the inequalities and pain that mothers go through when they are unable to provide for their families (Nhlanhla and Anonymous, females, conversation, 2016). After multiple incidents of protests women in the leadership felt the need to organise other women independently, partly to more visibly aid the struggle but also to formally recognise and respect the important role that women play as Freedom Park’s heartbeat. For these women indeed the struggle continues.

This article is part of larger study by Thembelihle Maseko entitled Intersections : a study of the private lives and public lives of selected women from the social movement organisation, Abahlali baseFreedom Park