Expose yourself on TV (Part Two) 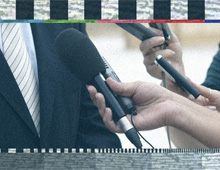 [intro]This column is part of Tim Knight’s series of Master Classes on the craft of Broadcast Journalism for The Journalist. Knight works out of Cape Town and is an Emmy-winning former head of TV journalism training at the Canadian Broadcasting Corporation (CBC).[/intro]

You’ll never move others, heart to heart, unless you speak from the heart.

This performance technique relies entirely on your following some simple steps.

It takes a little time (you have to carve a few more minutes out of your day. Maybe one less coffee break). It demands considerable concentration. But it works.

There’s even a guarantee attached. I guarantee that if you use this technique your on-camera and voice-over performance will improve.

This doesn’t mean you’ll suddenly become a great on-air performer. It does mean you’ll be the best you can be. And if you really want to be a great performer — and are prepared to work at it — this method will give you the best chance you’ve got.

But, you say, you’re a broadcast journalist. You can’t ad lib the script. Far too many chances for mistakes.

Anyway, pieces of the script often have to fill exactly into already-cut voice-over sections.
So what can a poor broadcast journalist do? Funny you should ask.

Prepare your script using this technique.

For both on-camera and voice-over narration the script should follow the writing guidelines (Write Like You Speak) from my previous The Journalist column.

In upper and lower case.

Each sentence on its own, separate paragraphs.

With an extra space between each paragraph.

You’ll speak from your own knowledge, like a real person. Instead of just mouthing black marks on white paper.

Laying the script out like this also makes over-long sentences stand out so they can be shortened.

Just as a reminder, this layout is as important for voice-over narration as it is for on-camera performance.
It works for both TV and radio. And for speechifying.

In fact, for any communicating where you have to deliver a script accurately. And pass on information to other people.

It makes the information accessible. So it can be savoured and retained by the person you’re talking to.

Performing on TV is stressful.

But audio booths and TV studios are part of our lives. So the trick is to control the stress. Make it work for you as energy. Not against you as tension and anxiety.

Sitting properly goes some way toward that end.

One person reading aloud from a script to another person is the least efficient form of human communication there is — with the possible exception of your average discussion between a parent and a teenager about the meaning of life.

Very little information gets through.

Almost nothing is retained.

Rehearsing before you perform ends the dictatorship of the script. Rehearsing makes you — not the script — the primary source of the information.

So how do you do this rehearsing thing?

Find a quiet place. Not always easy, but it can be done. An empty office? Maybe the washroom? If all else fails, stay at your desk and ignore the funny looks.

See each story as a one-act play.

Divide this one-act play into scenes — major thoughts — with a line. Don’t make any other marks except, perhaps, the occasional underline or italic.

The clock over the administration building stops at twelve minutes to eleven.

That’s when the explosion hits.

That’s when the five men die.

It happens in this building.

But it’s enclosed in solid concrete … to contain explosions.

So if all hell breaks loose inside … the hell stays inside … and the buildings around it aren’t damaged.

Still … the shock of the explosion was felt miles away.

Most of the people who work in this mine live in Beloil … just down the road.

Of course, in Beloil … at twelve minutes to eleven … they know immediately what’s happened.

Everybody just stops what they’re doing.

1. Quality of performance doesn’t really matter. It’s a rehearsal. Accuracy, however, does. You’re imprinting, not memorising. You’re pushing information into your short-term memory, becoming the primary source of the information. You’ll forget the script as soon as the performance is over.

2. Study scene # 1 until you think you can say it aloud pretty damn accurately.

3. Cover the script and say the scene aloud pretty damn accurately. Without checking.

4. If you get lost in the scene, struggle to find it. Think. Don’t uncover the script and check it unless you’re completely lost. Try to find the information. It’s there in your memory. You’re training your short-term memory to absorb information and make it accessible when needed.

5. If you still can’t find the information after struggling and have to check your script, do it. Then rehearse — just this scene again from its beginning.

7. Now, slowly read the whole script again to yourself. Not aloud, because you’ll retain the sound of reading in your mind. Concentrate on the logic, the connections, the flow of ideas and scenes.

8. Congratulations. You’ve imprinted. You are now the primary source of the information. The script has become the secondary source.

9. Carry the story inside you to the studio. Don’t chit-chat with anyone along the way. Don’t call home. This is not the time to discuss the fallacy of journalistic objectivity or the merits of the clitoral orgasm. Short-term memory can be very short.

10. Tape or go live with the script as soon as possible after the rehearsal.

11. Ad-lib something to do with the subject matter for about 20 seconds. The idea is to take your mind and senses back into the story and make your voice sound natural.

12. Pause briefly so the ad-lib won’t run into the performance (live). Or so it can easily be cut off by the editor (taped).

13. Start saying the script in the same voice and with the same volume and speed as you did the ad-lib.

14. Use the script. This is not a memory-test. Consult it. Check it. Refer to it. But don’t read it. You, remember, are the primary source now. You’ve imprinted the story, the information, into your short-term memory. It’s yours. The script is only a map. A way for you to go accurately from one place to another. But the story and its meaning are yours. All yours. You’re in charge.

15. You should be able to spend at least half your time looking at the viewer instead of the script. Thinking aloud at the viewer.

16. Remember that line separating each major thought, each scene, in the script? That’s there to tell you where the thought’s climax comes. Respect it. The viewer doesn’t know what the thought is, what it means, until you’ve reached the line and completed the thought. So when you get to the line, be looking directly at the viewer.

17. That’s when you also pause briefly, still looking at the viewer. It’s exactly what we all do in real life. We wait to see if the other person has understood the thought. The pause is vital. It allows the viewer to process and consider the information, the thought, the scene. To accept the information. Or reject it. To check it against information already known. To add it to information contained in previous scenes.

18. The pause, while still looking at the viewer, is also vital for you, the performer. It allows you to wrap up a scene, a thought, with strength and conviction. To signal the viewer that a new scene is to come. It also — just as important — allows you to adjust your emotional compass to the new information coming in the next scene. So you can give the next scene a differently appropriate emotional conviction and tone.

19. While you pause (how long should the pause be? Whatever’s appropriate in real life!) your mind is still on the just-finished scene. After the appropriate pause, if you need to, check the script and by all means start reading the next scene. But you’re the primary source of the story so you should be able to leave the script and look directly at the viewer fairly quickly. And finish the scene looking at the viewer.

20. If you screw up while recording, either start the scene again from the beginning or, if the performance is going really well, keep going and re-do the entire scene again at the end. And drop it in as a replacement. Everything is done in scenes because each scene has a life of its own, a different emotional meaning. Which means that each scene needs a different — and appropriate — emotional performance.

21. If it’s a recording and you’re not satisfied with the performance do another take and another unless there’s one minute to air and colleagues are lining up outside threatening to kill you. It’s not the mark of a professional to be a one-take wonder. If possible, keep taping your performance until you’re absolutely satisfied. In spite to myths to the contrary, the performance will not deteriorate. In fact, if you’re using this technique, it will improve.

22. You’ve now done the most difficult thing a broadcast journalist can do. You’ve performed a script absolutely accurately and made it sound as if there’s no script there. Just you, thinking aloud about stuff you know and care about.

Watch your performance at home. Not in the newsroom or studio where everyone’s hyped up on the broadcast equivalent of steroids.

And don’t ever be dishonest or untruthful or selfish on air again.

Instead, lay out your script like I’ve described, rehearse, and go talk naturally to the viewer about things that matter to you both.

It takes a little time to learn and practise this technique.

You have to sweat and swear and strain a bit.

And colleagues will look at you oddly a bit.

But I promise that it’s worth the sweating and swearing and straining. And the odd collegiate looks.

For both you and — much more important — the viewer.

This column is adapted from Tim Knight’s book, Storytelling and the Anima Factor, now in its second edition on Amazon and lulu.com.

It’s the eleventh instalment in Knight’s Master Classes for The Journalist on the craft of broadcast journalism. Earlier columns were The Business of Social Journalism, How to Interview (parts 1 and 2), The Unknown SABC Story (parts 1, 2 and 3), Storytelling Is Magic, Screw The Inverted Pyramid and The Curse of the MAMCWWM.

Next week in this series, Knight explains WHY you should expose yourself on TV. 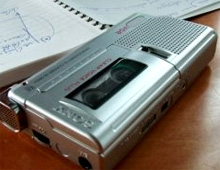 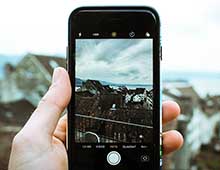 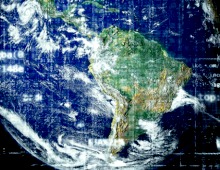 It’s the new Age of Discovery — but where are the pilots? 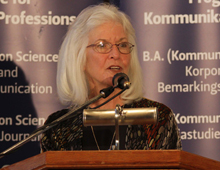