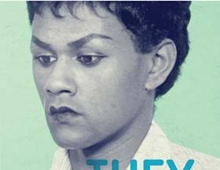 Book Review: They Called Me Queer﻿

A recently published collection of poems, stories and essays destabilises the notion of a single queer story and contributes to an expansive LGBTQIA+ archive.

It is important to see yourself in everything. As critical concepts such as representation and diversity continue to be brought into cultural conversations, from film to literature and music, our school syllabi and the streets, we should be gifted with finding ourselves in every articulation of being. Queer and trans people often wait years before finally coming across atypical, nuanced portrayals of queerness.

Speaking into, against and beyond these chasms, Kim Windvogel and Kelly-Eve Koopman attempt to challenge the under-informed concepts of queerness in South Africa with their recent compilation, They Called Me Queer. The book gathers a diverse collection of voices, which share with a clarity, passion and vulnerability that broadens and archives the queer lived experience in South Africa.

The collection is inspired by She Called Me Woman: Nigeria’s Queer Women Speak, an anthology of firsthand accounts. It is edited by Azeenarh Mohammed, Chitra Nagarajan and Rafeeat Aliyu, queer women, who have been erased from Nigeria’s social fabric.

While both projects are concerned with the lived experience, they differ, beyond location and focus. They Called Me Queer aims to provide a deeply diverse portrayal of queerness in South Africa through different forms of expression, including poetry, short stories and non-fiction essays. There are stories of trans people, gay men, lesbian love, non-binary identities and the many previously under-represented manifestations of queerness.

In the foreword, Windvogel says: “This first compilation of They Called Me Queer intentionally centres the writing and stories of QPoC – where freedom was given to be expressive in whatever format brought the contributors joy.” QPoC is Queer People of Color, the University of Southern California organisation that was the first to address minorities within the LGBTQIA+ community.

The book opens with Weight, a poem by Shelley Barry. Exploring disability and desirability, the poem is a striking entry that warmly clasps your hand, welcoming you to the opulent corridors of queerness you are about to explore in this collection. It exemplifies the editors’ noble goal of inclusivity.

Perusing its corridors, the book confronts readers with a surplus of special narratives that truly embody the multifaceted and living offering of the South African queer spirit. We cannot ignore how many stratifications of oppression interact, fold into and fold out of each other to create the unique marginality in the country. By the time you are confronted with the reality of your queer marginality, you have already been living an oppression – racism, sexism or classism.

How one’s queerness holds space in this conundrum of oppression is one of the most burdensome challenges for LGBTQIA+ people in South Africa. They Called Me Queer, as a collection, is proof that regardless of this tension, South African queerness is wide, evolving and reconnecting to itself. It is a vehement sun that refuses to be eclipsed.

The book centres on queer black people in South Africa, but many can find themselves in these stories as they stretch beyond the country and sexuality. All these stories begin and end with humanity. They show queerness in relation to many aspects of history and language.

In his essay, Trans-Afro-Futurism, Clio Koopman challenges the reader to imagine a trans Steve Biko, “Biko is the poster child of masculinity and of what a strong black man is. No one can know he has a vagina, breasts and menstruates. Why is this so ridiculously hard to believe?” Koopman neatly shows how his queerness is tethered to his historical oppression and the bodies of those who came before him – why can’t revolutionaries be queer? Why does queerness have to exist as a silo when queer people are participants of society?

In Open Letter, Craig Lucas, who won season two of singing contest The Voice SA, reminds us about the complex relationship of space and coming out. While competing in a national competition, he was told to remain closeted during his time on the show to secure women’s votes. Winning, he was again advised to keep his relationship with a man quiet.

This is a familiar narrative of how in every new space, queer people must either declare their sexuality or remain quiet, which is then perceived as hiding. Non-queer people do not have to worry about the “sexuality declaration” many encounter in every new friendship or workspace. There is a horrifying trauma in having to continually announce who you are, because the world expects you to, because you are perceived as “other”.

Tiffany Kagure Mugo continues the exploration with Coming Out: A Series of Strange Events. Through her personal journey, she writes of the peculiarity of “coming out” as a concept.

It is explored further in the wonderfully intimate conversation captured in Free, So Furiously, a conversation between Maneo Mohale and Neo Baepi in which they interrogate this colossally confusing and, honestly, stressful concept.

Coming out is a multifold experience. At times it feels like an endeavour that is a lifetime covenant and there are many kinds of coming out, across the spectrum of gender and sexuality. The works in this collection are constantly in conversation with one another.

Even though the body of work is necessary and topical, the book does have difficult moments. Its cadence is haphazard. One moment you’re reading a poem, the next an academic text, which can throw your concentration. Grouping similar pieces would have contributed considerably towards organising the publication’s thoughts and mood.

In Haji Mohamed Dawjee’s piece, Becoming: The Fourth Stage, the writer says: “Cancer has four stages. And so does coming to terms with your identity. Well, in my case at least.” As specific as this experience is to the author, it always feels like pathology to compare queer identity to an illness and the concept lacks completion. But perhaps it opens up an important conversation about how queerness remains pathologised in societies, which deeply affects queer people, raising an experience that is valid and that has echoes.

Beyond a single story

The book remains true to its mandate to destabilise the idea of the single queer story. Queer people may be walking chasms of rejection, brokenness and cynicism but they are also mishaps of light, freedom and love.

The collection tries to capture their pantheon of existence, from Of Names and ‘The Blood That Falls’ by Carl Collison, which shocks with its vivid descriptions of the violence with which queer people are unfortunately all too familiar, to the personal and academic text Breaking Down the Walls: Colonial Legacies, Home and Heteronormativity by Jamil F Khan, which documents his experiences in all the homes he has lived, and Questions Asked by Sandrine Mpazayabo, which considers queer identity alongside displacement as first-generation South Africans with immigrant parents.

This first edition of They Called Me Queer is vigorous in its aims. With further editions, the book could become a quintessential archive of queer realities in the country, remaining true to its expansive original aim.

This article was first published by New Frame.