Donald Trump’s most recent twitter storm targeted South Africa when he asked Secretary of State Michael Richard Pompeo, to ‘closely study’ land expropriation and “large scale killing of farmers”, but this is yet another one of those moments that points to the crisis of liberal democracy in a rapidly globalised world. Earlier this month Professor Manuel Castells delivered a lecture on Trump’s openly anti-globalism rhetoric, the use of big data in political strategies and the push back.

“We live in a world engulfed in multiple crises,” says Manuel Castells.

Castells is professor of communication, technology and science at the University of Southern California and winner of the 2012 Holberg Prize. He presented a public lecture Rupture. The Global Crisis of Liberal Democracy: Trump, Brexit and Beyond at the University of Stellenbosh earlier this month where he is a Donald Gordon Stellenbosch Institute for Advanced Study fellow. Castells’ lecture summarised the findings of his book to be published by Polity Press in September, “Rupture. The crisis of liberal democracy”. He focused on the conditions leading to the election of Trump and Brexit as key examples of the crises of modern democracy.

Castells said the political system we have been building is simply not working and that there is a breakdown between government and citizens. He pointed out that over two thirds of citizens do not feel represented by their governments or political parties, and 80% think politicians work only for themselves.

“The ideal of democracy is dying,” he said. “Financial volatility, rampant inequality, global terrorism, moral uncertainty, climate change, widespread racism, sexism, xenophobia and geopolitical tensions. Yet, there is a more fundamental crisis: the crisis of liberal democracy. This is collapsing worldwide – because institutions only exist if they live in people’s minds. Today the large majority of people do not feel represented by their governments. While they believe in democracy they do not believe they are living in a democracy.”

Castells said that politicians are despised and the media is not trusted, evangelical churches are emerging as a key force and even though people are more interested in politics than ever before, they don’t trust the people who get our votes and manage our money. He said recent political developments demonstrate that people are ready for alternative political options with which they can identify, regardless of its moral standing and this explains the rise to power of Trump, Brexit, the neo-fascist governments in Italy and Eastern Europe, the collapse of Brazilian democracy, and the crisis of legitimacy in Latin America, together with the persistence of corruption in most African countries.

“All of these reflect the political crisis of the last 5 to 10 years,” he said. “Currently the most effective systems are in countries that are authoritarian not democratic. China and Russia don’t even pretend to be democracies.”

And South African has not been immune to these global developments. According to Castells South Africa is ‘no special case’ as it has undergone a loss of legitimacy following the collapse of ANC control, the resignation of Zuma under pressure and the rising influence of parties like the EFF.

“Luckily,” he added, “South Africa has a good judiciary and media.”

Castells pointed to some of the factors he believes were responsible for the Trump era of American politics including Trump’s openly anti-globalism rhetoric, his outright condemnation of Mexicans (describing them as rapists, criminals and traffickers), Russian collusion particularly regarding email hacking and social media, and the leaders extremely savvy media strategy. “Trump is outrageous but the world talks about him. He governs by Twitter and we are all waiting for the next juicy statement,” said Castells.

“Trump turned himself into a movement – he gave the anti-establishment a face,” he said.

One of the most interesting aspects about Trump’s victory is who actually voted for him. According to Castells it was largely the white working class, especially in the rural mid-West, the election was dominated by the politics of identity and Trump was able to mobilise the identity of white males. “They are the group who perceive themselves to be most affected by globalisation. Older people, marginalised by globalisation and technology, against the cosmopolitanism of the elite, threatened by invasion – so called ‘strangers in their own land’.”

“Hillary Clinton did everything she could to lose the election despite having more money and resources at her disposal…Even 52% of white women voted for Trump,” he said.

Since taking over, Trump has introduced conservative economic policies including cutting social programmes and making tax cuts “all of which is okay with the white working class who voted for him,” said Castells. “The Democratic Party, by contrast, is in disarray – seen as supported by ethnic minorities and increasingly in contradiction with the white working class.”

Increasing US isolationism and the loss of power and influence in the world means that countries like China are filling the void especially in Latin America. Castells believes that similar forces led to the Brexit decision in the UK and again it was older, less-educated people who voted in favour of Brexit, those who don’t feel prepared to compete in the global world and feel left behind by globalisation. Feeling strangled by competition for jobs, social services, education and housing as well as the lack of a common European identity, the vote was seen as an opportunity to take back control of their lives.

These concerning trends continue in the rest of Europe. “Countries like Italy, Poland, Hungary and Austria are all being led by openly nationalistic leaders. Italy has closed its borders to refugees describing them as ‘human flesh’; Hungary has imposed a 25% tax on NGOs that help others in the world; even Scandinavian countries – usually a beacon of hope – have seen some rise in support for more nationalist parties.”

He highlighted the new kind of politics in the world which uses big data to manage proceedings, is based on the personality of the leader and destroys the opposition by destroying trust. And even though social media and social networks have expanded citizens’ participation in politics, everyone also has the ability to spread fake news – leading to increased uncertainty.

“We literally do not have methodologies to predict or understand the future,” he continued. “We do not have any instruments to manage the multiple crises threatening our lives.”

But Castells also looked at the push back, social movements like the #MeToo movement, youth advocacy groups, groups of the LGBTIQ community and environmental movements that provide “beams of light”. 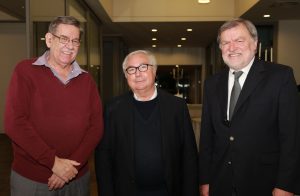 Manuel Castells is Professor and the Wallis Annenberg Chair in Communication Technology and Society at the University of Southern California. He holds joint appointments in the Department of Sociology and in the School of International Relations and is also Professor Emeritus at the University of California, Berkeley. He was born in Spain and grew up in Valencia and Barcelona. He studied law and economics at the Universities of Barcelona and Paris, and received doctorates in sociology and human sciences from the University of Paris-Sorbonne. Prof. Castells has published extensively. This public lecture, presented by the Stellenbosch Institute for Advanced Study where Castells is a Donald Gordon fellow, is based on his forthcoming book entitled ‘Rupture. The crisis of liberal democracy’ to be published in September. He is seen here at the lecture with Johann Mouton (left) of the Centre for Research on Science and Technology (CREST), Stellenbosch University and Hendrik Geyer (right), Director of STIAS.

The Stellenbosch Institute for Advanced Study (STIAS) was founded in 1999 by Stellenbosch University with the intention to develop it as an independent and national research institute with an international reach and impact. Find out more about STIAS here.

The Chinese Yuan – is this the world’s new super currency?

Building solidarity across class divides will take more than a march

The words were the caption of Khensani Maseko’s last post on her social media page before she took her life. They are cries for help that remain a living voice of Khensani’s call to the country to unite in healing the wounds of the women that are raped, abused and shamed daily by men. Moreover, […]

Rooted in a mentality that blacks are ‘non-persons’