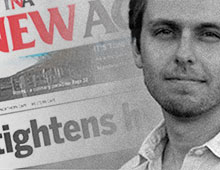 The last ten days have seen the most intense debates unfolding about the state of the South African media. Steven Motale, editor of The Citizen sparked much reaction when he wrote a piece apologising to President Jacob Zuma about the way the media have treated him. Editor of New Age then added a new twist by asserting that the media were acting as opposition. Senior journalist Stephen Grootes then waded into the debate before EWN’s Alex Eliseev wrote his own tongue in cheek “I am sorry” piece. This week Moegsien Williams again took to his computer, in response to Eliseev’s missive. The Journalist carries both pieces below. Williams’ original piece is carried in our Craft section.

I was so pleased to read your open letter to South Africa. Since I haven’t seen you much since we parted ways at The Star, memories flooded back of a long-haired blonde youngster forcing an appointment with me for a job.

One of the great joys of being in the profession for as long as I have been is to spot talent (and to be proven correct afterwards). You were one of them. What a pleasure it was to work with you and how crestfallen I was when you sought greener pastures and rebuffed my later attempts to get you back.

I still see your then news editor at The Star Vuyo Bavuma bustling to my office to say: “Hey Moegsien, see what the White Russian (his nickname for you) has come up with now”. It used to be some or other scoop or investigative story on which you had used your exceptional abilities to get sources to trust and talk to you.

Your open letter was well-crafted and well-considered and I agree with virtually all the points you raised. You are such an asset to the journalism profession in South Africa, your 30 mentions of “sorry” weren’t really necessary (although my colleagues will castigate me for being dim and not picking up the tongue-in-cheek tone or even sarcasm in your piece).

People like you are the future. In your hands we, the passing generation of journalists and editors, will thrust the baton of a free press with a prayer and hope you will live up to Article 16 of the Bill of Rights which guarantees all South Africans freedom of expression.

But In the tradition of Africa, as the young ones assume the mantle of responsibility, they listen to the elders’ words of advice.

At the very least, respect Steve Motale’s epiphany in his column in The Citizen last week as the act of a brave man. William Butler Yeats’ poem The Second Coming has a lovely stanza apt for our current debate on media and all the issues you articulated so well in your open letter. “The best people lack all conviction and the worst of us are full of passionate intensity”. The phrase “lack of conviction” has been interpreted by many as self-doubt or a crisis of moral courage. In essence, Yeats alludes to a battle between good and evil.

I have spoken a lot to Motale recently. He clearly had self-doubt about writing the column. He was also shocked by some of the negativity that greeted it. He nevertheless proceeded to confront his own and other dragons and dealt with the contradictions in his mind. You don’t have to agree with his views but you must admire his courage and give credit to a good man with conviction. You do yourself a disservice by flippantly dismissing the Motale’s opinion.

As you may be aware, I also penned a column. The thrust of my argument was that the bloody-minded, out-and-out adversarial approach in our coverage of the government of the day and the ruling party is counter-productive. We are behaving as if we are the unelected opposition and creating a perception everybody in government are corrupt.

I also called for a re-evaluation of our craft and for “constructive” journalism. Let me hasten to add (before you reach for the bucket!) I am not talking about sunshine or imbongi journalism as one wit on twitter said. I humbly posited, in this age of declining audiences, massive advances in social media, newsrooms and newspapers in trouble, venerable institutions like SAPA disappearing, the quality of journalism leaving much to be desired, that it’s an appropriate moment for introspection.

Media’s credibility and relevance in a country where half the population is not even covered by the commercial media are dissertations on their own.

My basic problem with your “I’m sorry” piece is the notion of more of the same. You are saying let’s cut this government no slack. You are dismissive of “happy stories as nonsense”. In fact, you’re saying lets pile on the criticism. In the face of a rapidly changing media landscape and things like a Media Appeals Tribunal looming, your attitude is reckless.

The only problem is “they” – the policy makers and decision makers – are no longer listening to you. You have been dismissed as part of a group beating the same boring drum. If we continue on this path, we will lose our most vital function which is to influence policy for the common good and the opportunity to be part of building a great nation. The badge Lord bestowed on us as the fourth estate would have to be surrendered.

As elders like I and greats like Joe Thloloe, Mathatha Tsedu, Thami Mazwai, Hugh Lewin and many others hand you, the “White Russian” and a new cadre of scribes, the baton, all we ask is, pause, “take a listen”, have an open mind, reinvent our journalism and try new things. And don’t ever be sorry.

“Sorry” may still be the hardest word, especially for a journalist, but who the apology is aimed at and what sins are being atoned is what really matters. If we’re going to apologize, this is what it should look like:

I’m sorry that there are not more of us: reporters who don’t apologize for doing our job.

I’m sorry that journalists are being retrenched as newspapers cut down circulation or shut down titles.

I’m sorry that newsrooms aren’t comprised of hundreds of hacks fighting each other for a chance to get onto the front page or to lead a bulletin with a big exclusive story.

I’m sorry that there are not nearly enough career journalists who make it their life’s work to annoy politicians and presidents.

I’m sorry that we don’t have bureaus in each and every single province, with strong teams to expose local corruption or cover local events. God knows the Eastern Cape alone would keep a team of 100 reporters busy 24/7. Never mind Limpopo.

I’m sorry we don’t always have the luxury of having beat reporters. Specialists in fields like education, health, science (I think there is one dedicated science reporter in this country?) or crime. Specialists who can better explain the world around us and empower us.

I’m sorry that scandals flow so quickly that to see a particular story through to the end is not always possible.

I’m sorry that we don’t spend weeks visiting a hospital to expose the horrors that unfold there. Or schools, where children are perched on dustpans instead of chairs, or where their new iPads are stolen at the speed of light. Far too often these are hit-and-runs.

I’m sorry that we can’t be there every time a protester is beaten to death by the police, or a family is tortured during a house robbery, or a man is denied access to an asthma pump in the holding cells, or a pregnant mother is turned away from a hospital, or a camp-full of refugees is cleared by force, or when any injustice takes place…

I’m sorry that we have only scratched the surface of the collusion and corruption in the private sector.

I’m sorry about what is happening to some media ownership and how its impacting content. Sometimes, what you are being offered is nothing short of intellectual fraud.

I’m sorry that we are still finding a model that can sustain solid investigative reporting in the digital age. We’ll get it right, just give us time.

I’m sorry that issues like mob justice, xenophobia or taxi violence are not explored more deeply and consistently. Or that labour issues explode only when there’s a strike or a sex scandal.

I’m sorry that so few organisations are able to have a dedicated reporter sit through a full trial or a landmark hearing like the Marikana inquiry.

I’m sorry for not having the ability to rip open and expose the endless corruption at municipalities as much as we would like.

I’m sorry for this weird perception that all of us in the media are conspiring to bring down the ANC. That’s just a load of crap. I’ve worked in five different newsrooms and have never had a story censored. Nor have I ever been forced to write or voice a politically loaded report.

I’m sorry that we make mistakes. At times, rather embarrassing ones. But since we are not robots, these things do happen. What’s important is how we deal with them. And for every mistake there are a hundred good pieces that go out.

I’m sorry that we have not been more critical of Jacob Zuma and his government. While his scandals have kept us busy – from Nkandla to MaNtuli – there are many other areas we should be paying more attention to (foreign and economic policy, his appointments, the damage he is doing to crucial institutions, etc).

I’m sorry we have not used the laws and courts more to fight for access to information.

I’m sorry that those of us who care deeply do not write more analysis or books about issues that really matter. The onus is on us to make complicated matters accessible. We are the ones who must unpack, explain and sound the alarm.

I’m sorry for this other perception that we have to tell happy stories in order for nation building to occur. I’m not sure where that comes from, but it’s nonsense.

I’m sorry that our internal disagreements are sometimes aired in public. You deserve better.

I’m sorry for all these things, and more. But, as journalism professor, Anton Harber, pointed out recently, the media’s greatest failing is not that it has been too critical of Zuma and his administration but that it has not been critical enough.

For that, I am truly sorry. We will try do better.

Spotlight on quality of content, role of media and transformation matters

The world that the now famous Cecil inhabited

Miners Shot Down. Rehad Desai talks to The Journalist