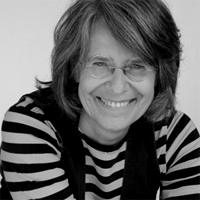 Antjie Krog is a poet, journalist, academic and writer currently lecturing at the University of the Western Cape. Her first employment was as a journalist at Die Burger (1974). She lectured at Mphohadi Training College for Black Teachers in Kroonstad and Brentpark High School during the eighties. In 1993 she became editor of Die Suid-Afrikaan, then political reporter for SABC radio in Parliament, heading the SABC’s reporting team the following year on the Truth and Reconciliation Commission. In 1998 she was appointed political editor for SABC Radio in Parliament. She is currently extraordinary professor in the Arts Faculty at UWC.

In addition to winning the Eugene Marais prize, the Hertzog prize, the Alan Paton award and Olive Schreiner prize, she also won the Foreign Correspondent award for outstanding journalism in 1996. Her radio team won the Pringle Award for excellence in journalism for reporting on the Truth Commission. Krog was awarded the Hiroshima Foundation prize for Peace and Culture as well as the Open Society Prize (2006) from the Central European University (previous winners were Jürgen Habermas and Vaclav Havel).

Described by her contemporary Joan Hambidge, as the Pablo Neruda of Afrikaans, Krog published her first book of verse, Dogter van Jefta (Daughter of Jephta) at the age of seventeen. Within the next two years she published a second collection titled: Januarie-suite. Since then she has published several further volumes, one in English. Much of her poetry deals with love, apartheid, the role of women, and the politics of gender. Her work has been translated into English, Dutch and several other languages.

She is best known for her book Country of My Skull, which chronicled South Africa’s Truth & Reconciliation Commission. With Krog’s reluctant permission, the book was later dramatised for the screen by Ann Peacock resulting in a film of the same name. Released in the United States as In My Country, it stars Samuel L. Jackson and Juliette Binoche.