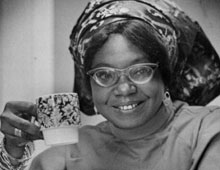 Flora Nwapa and the Letter That Changed Nigerian Literature Forever

She probably didn’t imagine that much would come out of it. However, 50 years later, we celebrate Efuru, a feminist and cultural work; and the first book written by a Nigerian woman to be published.

Unlike most writers of her time, becoming a writer did not start out as Flora Nwapa’s life’s goal. “There was nothing in me when I was in school that made me feel I was going to be a writer. It was one of those things that just happened. I didn’t have the ambition to say, “Oh, Flora, you are going to be a writer, so work towards it.”

She was 27 at the time and had just returned from Scotland. An Edinburgh University diploma in hand, she got a job teaching at Queens College in Enugu. Teaching at QC was great for a first job, but it also meant a lot of down time. Drafting stories became something she did to ward off boredom.

So you can imagine how delighted she was when she not only received a reply from Achebe, but also found a little surprise gift in the mail. Achebe had just been appointed an advisory editor for the African Writers Series.  In the letter he wrote to Nwapa telling her how much he loved the manuscript, he included one guinea—the postage fee to have the manuscript sent to London.

Thanks to Achebe’s one guinea, Nwapa’s manuscript arrived in London. A few years later, in 1966, Efuru  was published and became one of earliest novels written by an African woman and, certainly, the first written by a Nigerian woman.

2016 marks the 50th year anniversary of this historic novel. Efuru  was the first of many attempts by women cross Africa at dismantling the boys’ club that was the African literary community. As Buchi Emecheta has said time and again, the African literary community was viciously sexist. Women were often regarded with suspicion and condescension. Add to this the simplistic representation of women in literary works by male writers. Nwapa was acutely aware of the gender disparity in African literary circles. In a world where women were excluded from the educational and intellectual communities that fostered creative work, it was near impossible for women to become writers.

Today, things are unbelievably different. African women run the world of African literary fiction both at home and on the global stage. From Chimamanda Adichie, Nnedi Okorafor, Imbolo Mbue, Lauren Beukes, Yvonne Owuor, Petina Gappah, Taiye Selasi, to Chinelu Okparanta, the list of African women producing significant work, making the big bucks, spearheading global cultural movements is literally endless. But we do have to acknowledge—and this is why it is important to tell Nwapa’s story—that we owe the contemporary success of African women writers to women like Nwapa in Nigeria and Nadine Gordimer in South Africa. They broke the cycle of exclusion that prevented women from excelling in the creative fields.

Even though Nwapa refused the feminist tag, she saw her work as an intervention in an African literary culture where women were often portrayed from a male-centered perspective. She saw her novels as an attempt to think of African femininity beyond the idea of victimization. She was tired of the way male writers represented African women in their novels. African women were more than simply poor traders, prostitutes, and unhappy wives. Writing her own novels allowed her to refashion African femininity through complex and multi-faceted characters.

When it comes to her visionary representations of African women, she owes it to the culture of women empowerment that defined her upbringing. Nwapa was reported to have said that “if she is considered the doyenne of African female writers, the glory goes to the oral historians and griottes who mesmerized her with stories about the mystical powers of Ogbuide, the mother of the lake, her family members of industrious women and men who served as role models, as well as her penchant for service and the pursuit of excellence.”

This helps us understand Nwapa’s refusal of feminism as a politics of women’s empowerment—an aspect of her life and work that has intrigued literary scholars for decades. “I don’t think that I’m a radical feminist,” she says in an interview, “I don’t even accept that I’m a feminist. I accept that I’m an ordinary woman who is writing about what she knows. I try to project the image of women positively.”

Nwapa felt that feminism was a politics of empowerment that assumed that a woman was a victim. Nwapa saw feminism as a politics that had to first position women as victims so that it can then empower them. Nwapa insists that she comes from a world where women have never been victims. Women have always been powerful and striven to achieve financial independence. She wanted a politics that fought for expanding and nurturing the power that women already had. It is not that Nwapa believed that there was no such thing as gender inequality. She just did not want to see a woman as a victim but as someone who was always enterprising and looking for ways to undermine the systems of power that tried to put her down.

Her writing and her presence in the African literary scene spanned decades. After Efuru  in 1966, Nwapa went on to publish three other novels up until the 80s, in addition to a posthumous work titled The Lake Goddess. In between, she published children stories and even dabbled in poetry. In the 90s, her career took an administrative turn with her serving as the president of the Association of Nigerian Authors and later as a member of the Commonwealth Writers Awards committee.

Beginning in the late 70s, Nwapa set up a publishing house called Tana Press—again a trailblazing project given that African publishing was also male-dominated. Though it was modest, it was the first press run by a woman and targeted at a largely female audience. A project far beyond its time at a period when no one saw African women as constituting a community of readers or a book-buying demographic.

Nwapa’s work inspired a generation of writers and thinkers, the most prominent of which is Chimamanda Adichie. Adichie has said that she owes her success as a writer to Nwapa’s pioneering work: “If Chinua Achebe and Flora Nwapa and Chukwuemeka Ike had not written the books they did, when they did, and how they did, I would perhaps not have had the emotional courage to write my own books.”

Three months before her passing, Susan Gardner came by to interview her. Gardner found Nwapa seriously ill. Her body was racked with pain, and she couldn’t get out of bed. But Nwapa would not agree to canceling the interview. She insisted that it go on as planned. That is how committed she was to the literary cause.