Book extract: My Father Died for This

When the Cradock Four’s Fort Calata was murdered by agents of the apartheid state in 1985, his son Lukhanyo was only three years old. Thirty-one years later Lukhanyo, now a journalist, becomes one of the SABC Eight when he defies Hlaudi Motsoeneng’s reign of censorship at the public broadcaster by writing an open letter that declares: my father didn’t die for this. With his wife Abigail, Lukhanyo brings to life the father he never knew and investigates the mystery that surrounds his death despite two high-profile inquests.

This is an extract from My Father Died for This

‘He Was the Gentlest of Them All’
– Sarie Smith, childhood friend

This question is something I have often wondered about at great length. What kind of relationship would my father and I have, if he were alive today? My mother has told me about how happy he was when I was born, and that he always referred to me as his best friend. Would we still be best friends? Would we be almost like brothers? Would we get along at all? Or would we have a more conventional father-and-son relationship built upon well-defined boundaries of communication, personal interactions, and relating to each other?

Pondering these questions inevitably leads me to ask a number of other questions, such as: What course would our lives, specifically mine, have taken were my father still alive? Would I be the man I have turned out to be today? Would my dreams, aspirations, fears, beliefs, successes, failures be what they are? Would I have become a journalist? Would I have met Abigail? So many questions, which I will never have the answers to – at least not on this side of eternity.

I usually console myself by telling myself that I am the man God intended me to be. And just like any other person on this earth, I am shaped by my lived experiences to be the unique, beautiful soul that I am. Those lived experiences are what led me to Abigail, the second daughter born to Brian and Mary Isaacs. A beautiful young woman from Stellenbosch whom I fell in love with the very instant I laid my eyes on her in late January 2008. We were both younger journalists then, she a parliamentary reporter for the Afrikaans newspaper Beeld, and I a general news and sports reporter with eNews, as eNCA was still called then. We were sent to cover an ANC meeting in Philippi, a township just outside Cape Town. Mathews Phosa, who was elected treasurer general at the ANC’s 52nd National Conference in Polokwane in December 2007, was in Cape Town to deliver the movement’s birthday or its January 8th statement, as it’s more commonly referred to.

I remember that Sunday morning like it was yesterday. Abigail first caught my eye as she walked towards the area where a group of us reporters were chatting, while idly waiting for Phosa to arrive. At the time, both of us had been working as journalists in Cape Town for around five years, but that morning was the first time we’d met. I remember asking my colleague, Nawaal Deane, the cameraperson I was assigned with that day, who that beautiful woman was. I couldn’t keep my eyes off her. I knew I had to speak to her, so I waited for an opportunity when I could go over and at least introduce myself to her when she was alone. That opportunity never came, so I went over while she stood talking to Chantall Presence, a fellow journalist. I’m sure Chantall must’ve thought me very rude for interrupting them. Abigail later shared with me that she thought I was quite forward to intrude on their conversation like that. I introduced myself to Abigail and made sure that I complimented her beauty. She was then, and remains to this day, one of the most beautiful women I have ever seen.

Back in 2008, I was sharing a flat with my friend Koketso Sachane. He still teases me about that day when I returned home from work and couldn’t stop talking about this woman I’d met and whom I was convinced I would marry. Mind you, I knew very little about her. I had no idea if she was married, in a relationship, or gay – all I knew was that if there was any chance at all, she would become my wife. How this would happen was inconsequential. I had it bad. After our first meeting, I saw Abigail again a few weeks later. This time it was during the melee that followed the 2008 State of the Nation Address. The second encounter confirmed just how completely enchanted I was by her. A few days later, she gave me her business card. I don’t think I waited a day before I called to ask her out for dinner. I was more relieved than happy when she agreed. I remember telling anyone who cared to listen that I had scored myself a date with the prettiest girl. Abigail and I eventually married three years later on 24 September 2011. Over a year later, on 21 December 2012 she gave me arguably the greatest gift a woman can give a man, when she gave birth to our son, Kwezi Mikah Calata.

Our son’s birth that Friday afternoon brought me full circle. I, now, was the father to a little boy with all the responsibility that fatherhood and parenting carry with it. Although Kwezi’s birth in our flat in Mowbray remains the singular highlight of my life, I was then, and continue to be, daunted by the prospect of fathering him. How do I become the best father I can be when my father was not there to model what fatherhood is for me. My frame of reference for what fatherhood is, is largely pieced together from the odds and ends my mother has relayed to me over the years about the kind of man my father was.

Unfortunately, I don’t have any memories of the brief three years I spent with my father before he was murdered. Instead, my first and only memory of him is of his funeral.

I’ve since come to find out that the date of his funeral was 20 July 1985. On that Saturday, I was just three years, eight months, and two days old. I remember it being bitterly cold. I remember the many, many buses and the thousands of people, some of whom had spent several days camped outside my great-grandfather’s home. My mother, elder sister, and I moved there at my father’s family’s insistence after his and Matthew Goniwe’s bodies were found five days after their disappearance in thick bushes just outside Bluewater Bay, a suburb of Port Elizabeth.

I remember a moment when I clutched my mother’s dress so tightly as she sat sobbing in the back of a slow-moving, blue Mitsubishi kombi. Its rear sliding door was open and it was surrounded by thousands of people. I also remember being terrified at the gravesite that the ground underneath me would cave in and that I would fall through it as it shook from the force of toyi-toyiing comrades. I remember the choking dust. The red coffins.

Despite many desperate attempts over the years to conjure up memories of my father alive, I just don’t seem to have any. My most fervent wish is that I will remember something about him – irrespective of what that memory is, just as long as it is of him alive. I know it would be a memory I’d treasure forever. 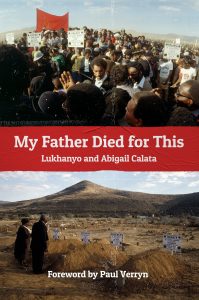 Lukhanyo Calata is a television journalist, who worked for eNCA before joining the SABC’s parliamentary office. He is the son of Fort Calata, one of four anti-apartheid activists from Cradock, assassinated by the government in 1985. He lives in Cape Town.

Abigail Calata is a former journalist who has worked for Beeld as a political reporter and parliamentary correspondent, Die Burger and the University of Cape Town’s Law Faculty. She currently works for the Shoprite Group as publicity manager: CSI and Africa. She lives in Cape Town.

Experiences of a brown woman in white South Africa

Book extract: My Father Died for This

The Cradock Four’s Fort Calata and his son, Lukhanyo